Baby Opossum in the Compost Pile!

Yesterday, my girls were texting me throughout the afternoon. So, as I was gardening, I kept my phone in my sweatshirt pocket. As I took a wheelbarrow full of weeds back to the “dirty” compost pile, I noticed a movement in the “clean” compost pile right beside it. It was a baby opossum!

I watched him for way too long, wishing I had my camera. Then, I realized I had a phone! And people take pictures with phones!  So I took some pictures. 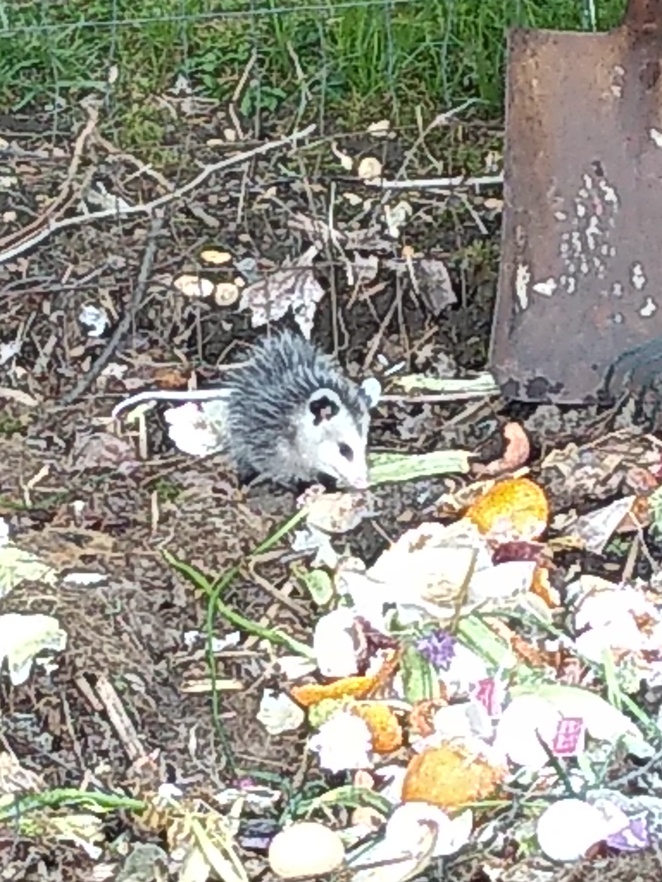 He was tiny – only about 6 inches of body. His face is next to a piece of celery for scale.  I took a lot of very bad pictures in a very slow manner. Then, I realized people take videos with their phones. So I took a video.  Baby Opossum Video

We’ll see if that link works. It was a windy day, so that’s the noise.  And he was eating the end of an onion! I went back after he had gone to be sure. Notice how he sees me inching closer, but doesn’t have the sense yet to be afraid of me. And look how his little ears move like a cat’s. It was a lovely experience. I never like to intrude too much on nature, so I backed away before I scared him off. He’s been back many times since. Michael put a little fence around the fresh veggies in the compost because Riley DOES like to intrude on nature.

Happy May, everyone. Be safe, be well. Hugs to you all.

31 thoughts on “Baby Opossum in the Compost Pile!”

Find me here as well: